Naraindra has been with the University of Toronto (U of T) for 20 years.

I am a Certified Yoga Instructor. I practice and teach yoga several times a week. 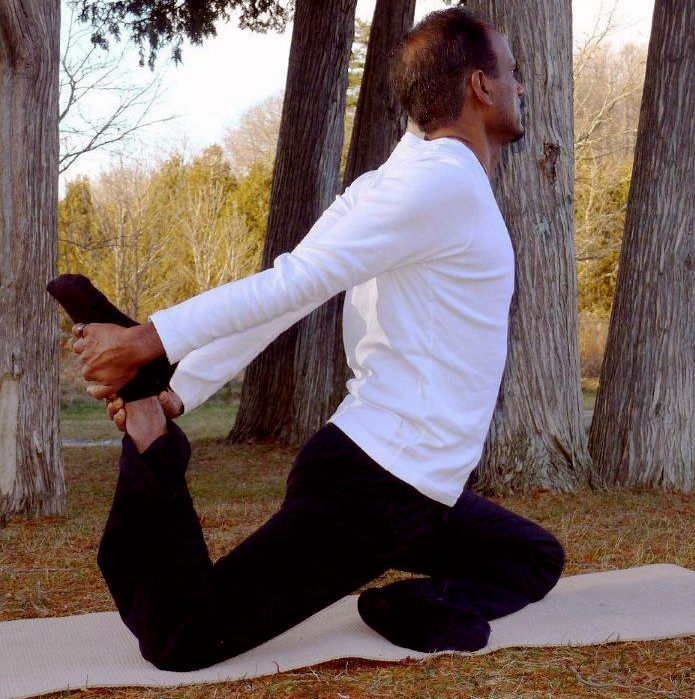 I became a regular yoga practitioner about 10 years ago, though I did express an interest in yoga a few decades ago (I leave this to the imagination!) in my first year as a student at U of T Scarborough (UTSC).

I took up various group activities, including martial arts, salsa dancing and yoga — I wanted to do it all!

However, with the heavy demand on my academic workload I soon had to make a decision between these activities and my academics. With that in mind, I made what would have been the better decision at that time and this included discontinuing my yoga practice.

Where do you teach and practice yoga?

I teach yoga at studios in the Durham and Scarborough areas, including the UTSC Athletic Centre. I also volunteer time on a weekly basis to teach classes to colleagues from various departments on the downtown campus as well as at my home studio in Pickering. In addition to teaching, I also attend a regular class as a student; I find this valuable since it not only allows me to participate in a full uninterrupted practice, it also keeps me in check through the eyes of my students when I am teaching.

I am inspired by the Yoga Sutras of Patanjali. This is said to be the greatest classical text from the yoga school of Indian philosophy, written in the second century BC. These ‘threads’ on yoga or union, are extremely terse, stating concisely and often precisely, essential points or techniques.

Originally, these teachings were oral and were explained and interpreted by commentaries from a teacher guiding the student. This holistic process with eight components is known as Ashtanga yoga, or literally ‘eight-limbed yoking.’

Each of these limbs is meant to address a different aspect or threshold of being. As Patanjali explains it, the external disciplines restrain one in relation to the external world, including objects and other beings, while the internal disciplines channel one’s personal energies toward realization. Each of the eight limbs should develop naturally with the others, just as a person’s physical limbs should, ideally speaking, develop over the course of his or her life time.

Most of all though, what continues to influence my commitment to yoga, and to even inspire me further, is to see the positive changes that my contribution can make to others’ lives, because, according to one of the Dalai Lama’s quotes “The purpose of our lives is to be happy.”