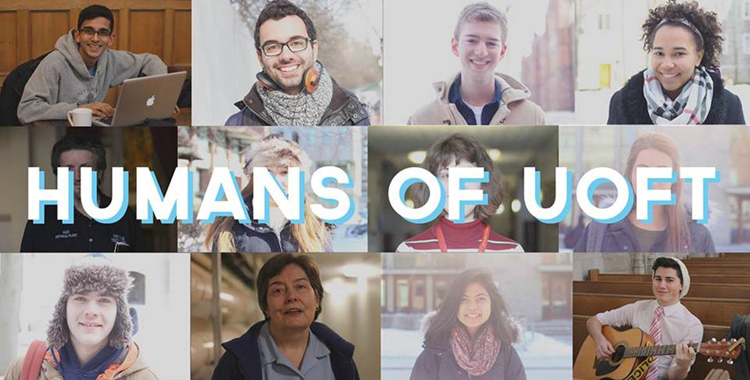 Without question, U of T is a big place. With thousands of students, staff, faculty and visitors it is easy to feel lost in the crowd at this ‘city within a city’.

A grassroots initiative is hoping to offset that sense of U of T as a vast impersonal institution by building a connected and engaged community one photo at a time.

From a student taking a coffee break, to a group of caretakers talking about the importance of family, to a night shift worker taking her dog for a walk on campus, Humans of the University of Toronto is a warm and friendly introduction to the people and personalities who breathe life into this great place.

The Facebook page has been well-received both with students and U of T administration alike. In July, U of T Provost Cheryl Regehr and Angela Hildyard, Vice-President of Human Resources & Equity, met with Jemel to commend her on the site and the fresh and authentic perspective it brings to recognizing U of T community members.  At that meeting, it was also agreed to support Jemel in an expansion of the project to include staff and faculty member profiles (who are “Humans” too, after all) and to promote the site more broadly.

For more information about the Humans of University of Toronto, or to nominate a staff or faculty member to be featured as part of the project, please contact Tony Bowman at 416.978.8842 or Katy Francis at 416.978.5700.