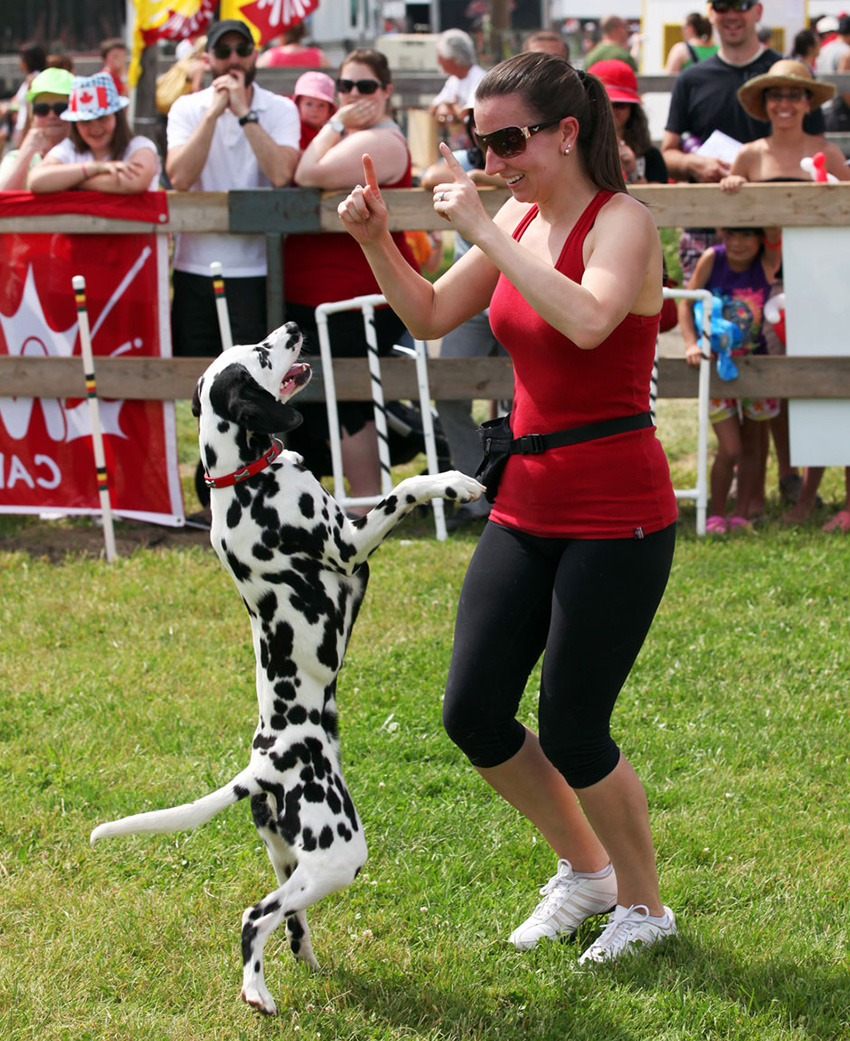 Ashley has been with the University of Toronto (U of T) for less than one year.

“While I’m new to my job, I completed all three of my degrees at U of T, so I’m not new to the University.”

I enjoy training my dogs, Teague and Cole, and performing with the President’s Choice SuperDogs International Performance Team. Superdogs is a theatrical family show where dogs dance, high jump, race and perform a variety of tricks for large audiences.

In addition to ticketed performances, the show is a feature attraction at a number of fairs and exhibitions across North America, including the Canadian National Exhibition and Royal Agricultural Winter Fair.

How did you first become interested in performing with your dogs?

I have always loved dogs and sport so it seems fitting that I fell into the world of dog sports.

When I first got Teague, I was living in a small condo in downtown Toronto. During the winter months it was difficult to get him enough exercise outside in the cold, so I signed us up for some dog sport classes so that he could play inside a couple evenings a week. I also found that I could stimulate him mentally and tire him out by teaching him extra tricks in the condo.

At a local agility demo we were spotted by a SuperDog cast member and encouraged to try out for the team. We have now been performing with the SuperDogs for over three years.

What events do your dogs do in the show? Where have they performed?

Teague, who is a five-year-old Nova Scotia Duck Tolling Retriever, performs all the events in the show, but his favourite events are the weave challenge, freestyle dancing, and relay races. Cole, a three-year-old Dalmatian, is a very talented high jumper. He also does disc and freestyle dancing.

We have been fortunate to have had the opportunity to perform all across Canada — from Vancouver, Saskatoon and Winnipeg, to Toronto, Ottawa, Montreal, Fredericton, St. John’s and Northern Quebec. Travelling with the team is an event in itself.

For many of the shows we fly with the dogs. Sometimes we take a tour bus. There are generally over 40 dogs travelling at a time, and you often share a hotel room with another team member and up to eight dogs!

I am inspired by my dogs’ enthusiasm to train and perform. It is an amazing feeling to see how excited the dogs are when they are on stage. Knowing how happy this makes them is what encourages me to keep it up.