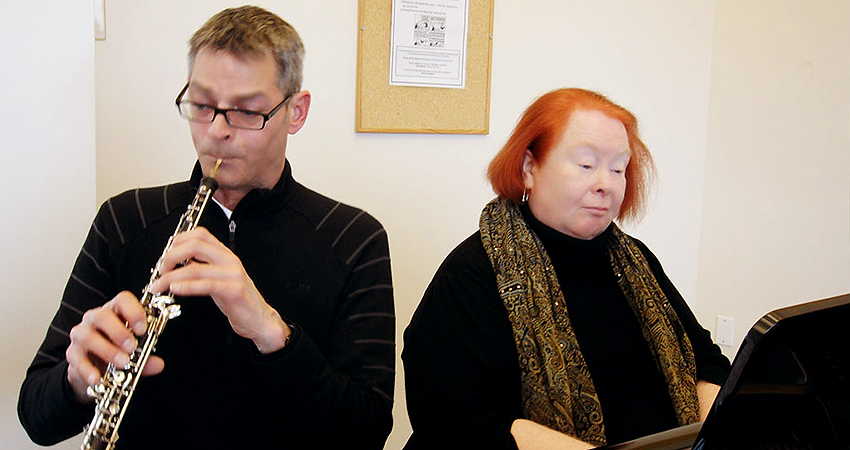 Beverly and Donald have been with the University of Toronto (U of T) since the mid-1980s.

Where do Beverly and Donald do off the clock?

Prior to April 1995, Lewis and Boere had never met in person, communicating electronically and only over faculty matters. That is, until Lewis emailed Boere to say she was arranging the entertainment for a colleague’s retirement from the Office of the Faculty Registrar. She had heard that Boere played oboe and asked if he’d be up for an oboe / piano duo performance at the party. (Some Telemann, perhaps?) Since then, they have been rehearsing and performing regularly.

Where do they perform?

The duo has performed in various recitals in Toronto and around the University over the years, including a fundraising event for Innis College (with Canadian oboist, Joseph Salvalaggio), four consecutive years in the U of T Sounds of Change event celebrating the International Day for the Elimination of Racism, and in their own project — an annual benefit concert titled Music for Haiti.

Every June, Lewis and Boere organize, direct and perform with faculty, staff and students from the Faculty of Arts and Science. These noon-hour performances at Hart House attract enthusiastic crowds with donations going to Doctors Without Borders / Médecins Sans Frontières for relief work in Haiti.

Who are their favourite composers to perform?

In addition to these composers, the duo also performs works composed by Lewis, including her “He Sits Spinning” and “Fundy Temperaments.”

“He Sits Spinning” — inspired by Mahatma Gandhi and commissioned by Joseph Salvalaggio, principal oboe of the Memphis Symphony Orchestra — is a haunting composition with an extended cadenza that showcases an oboist’s ability to employ circular breathing.

“Fundy Temperaments” was commissioned by Western Kentucky University for English horn and piano. Lewis reimagined it for oboe and piano. Boere raves about the multiphonic passage, the fantasy-like cadenza, and the doleful in paradiso section.

What’s next for the duo?

Lewis says she has a new piece in the works.  “It’s going to require both double-tonguing and circular breathing techniques,” says Boere. “From what I’ve seen so far, it plays mischievously with the oboe’s infamous duck-like sonorities and it’s sure to include bits of Bev’s signature non-harmonic relation compositional style. I can’t wait to play it.”