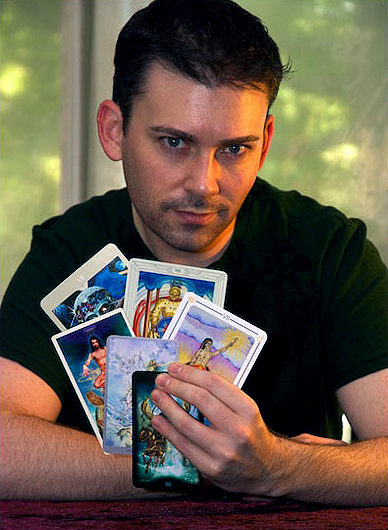 Devin has worked with UTM for 13 years.

In addition to reading the cards, I collect decks and tarot-related books.

I have attended a few tarot conferences where I have met artists who have created decks and authors who have written about tarot.

How did you first become interested in tarot card reading?

I got my first tarot deck when I was 12 or 13 years old and I’ve been fascinated with tarot ever since.

Learning to read tarot is a lot like learning a new language — the younger you are when you start, the easier it is to learn. Tarot intrigues me because at some level it is a language. It uses a structure founded on mysticism, is expressed through symbolism and imagery and is interpreted by a reader who adds his own personal style, skill and knowledge into the mix.

Where do you give your readings?

For the last few years, I have been doing the majority of my tarot readings in my office at UTM. During the fall, I do $20 readings for faculty, staff and students, and 100 per cent of the money I raise goes to support UTM’s United Way campaign. I think many of my tarot clients enjoy the inherent contradiction of coming to the research office for a tarot reading!

There are many big names in the tarot community that I’ve had the wonderful opportunity to meet, study with and be inspired by. I suppose my own tarot gurus would be Mary Greer, Teresa Reed, James Wells, Rachel Pollack, Marcus Katz, and Barbara Moore. There are also some tarot artists that have contributed to my love of tarot, such as Ciro Marchetti, Marie White and Stevee Postman who have created a few of my favourite decks.