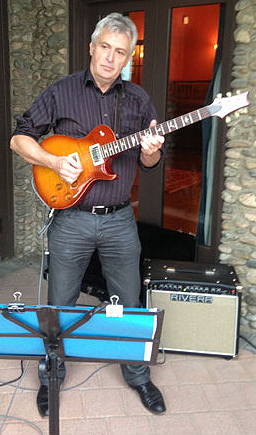 Gray has been with the University of Toronto (U of T) for two years.

How did you first become interested in playing guitar?

I started playing music seriously by age six, and by the time I was 14 I was playing in bands and orchestras publicly, performing on violin, sax, oboe, guitar, and a variety of other instruments.

Guitar stuck most, and over the years I kept playing and composing music despite other, more pressing, career-oriented interests.

Finally, when my son took up drumming, and wanted to learn jazz percussion, I was drawn back into music and the world of jazz. We went on various jazz music camps together, where we had to perform in public, and this was the start of a renewed interest.

That was about seven years ago now. It kick-started me into performing again with renewed vigour.

I guess the point I am making here is that your children can connect with you in remarkable ways that teach you something you always knew, but just perhaps didn’t value as much as you should have. If you take the time to learn from that, it can be a very rewarding experience.

What venues have you played in?

I play at various public venues. Most recently, I have been performing at events at UTSC, including Pub Night at Miller Lash House over the summer. I think people have enjoyed listening, or at least they have been polite enough to not throw anything as yet. Other venues are sometimes the open mic nights around the city.

Just about all serious jazz musicians, but clearly the work of the greats like Miles Davis, Herbie Hancock, and John Coltrane; and also the more modern jazz musicians here in Toronto, including Lorne Lofsky, Mike Murley, and Ted Warren, but there really are too many to mention.