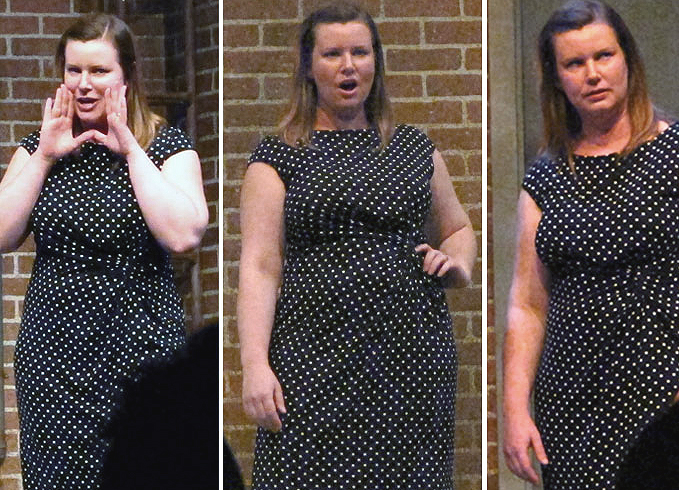 Justine has been with the University of Toronto (U of T) for one year.

Off the clock, I’m a comedy writer and improviser.

So after a fall spent adjusting to my new city, my new job and the concept of winter, I started taking improv classes at the Second City Training Centre in January 2013. Soon after that, I started taking sketch writing classes too.

This October, after hours and hours of sweeping the floor with a non-existent broom and hitting fake home runs, I finished the introductory Improvisation Program, and I have lots of hilarious, clever new friends — a few of us are even starting our own improv troupe.

I recently auditioned for the ultra-competitive Conservatory at the Second City Training Centre, and they picked me! Between my job at U of T and joining the Conservatory, I feel like my new Canadian life has really come together.

How and when did you first become interested in comedy?

I was a rather theatrical child; instead of soccer or Girl Scouts, I danced, acted, and sang. My brother and I, along with our three cousins, would put on comedy revues for parents after nearly every holiday meal.

My father, a filmmaker and university professor, made some hilarious short films starring the entire family (and my mom and her sisters invariably played witches, but that’s another story). So being a comedic performer was very much a part of my childhood.

I dropped performing, though, during my self-serious young adulthood. I wrote a lot of short stories and poetry, and I earned an MFA at California Institute of the Arts. It wasn’t until after I graduated that I started watching sitcoms through a different lens: these were sophisticated, well-crafted pieces of theatrical writing, and I wanted in.

Since then, I’ve written a couple of screenplays (one with my dad), several TV specs (sample scripts of existing TV shows), and a few TV pilots. My dad and I even had the opportunity to write some jokes for Lily Tomlin, which is still a huge comedy career highlight for me.

However, my chapter of trying to write for TV in Los Angeles was put on hiatus (pun!) when my husband got a tenure-track position at York University. He’s an assistant professor of ecological design for performance in the Faculty of Fine Arts.

Toronto is an incredible city for comedy, so I feel very lucky to have landed here.

Have you performed live, and where?

Through the Second City, I’ve had three improv shows: two at the John Candy Box Theatre and one on the Second City main stage on Mercer Street. I’ll have lots more shows coming up this next year with the Conservatory and my new troupe. (We don’t have a name yet, and we are open to suggestions).

The Conservatory is the Second City Training Centre’s premier program. We’ll engage in year-long study of advanced improvisation and sketch writing, and we will write and perform revues — with sketches, monologues, and songs — and improv shows throughout the year.

I’m inspired by people who are both creative originators and comedic performers, so both Amy Sedaris (who performed with the Second City in Chicago) and David Sedaris are high up on that list. Amy’s show Strangers with Candy is so wrong and yet so very right, and David’s Me Talk Pretty One Day falls into that category, too.

Lily Tomlin is a huge influence. Her character work is unmatched, and the breadth of her career is incredible — from her Oscar-nominated performance in Nashville, her fabulous stage shows, and her more recent TV work. If I had as much creativity and drive as one of Steve Martin’s gray hairs, then I would be lucky indeed.

I’d be remiss if I didn’t mention how much Tina Fey (also a former performer with the Second City) and Kristen Wiig inspire me. Both of them manage to write about the female experience in a way that’s both affirming and irreverent.

Nominated by Archana Sridhar, assistant provost in the Office of the Vice-President & Provost.