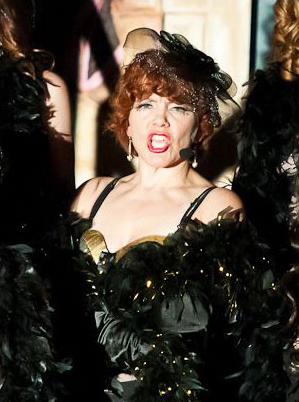 Kathryn has been with the University of Toronto (U of T) since 2003.

I’m the lead choreographer and production manager for Les Coquettes, a burlesque troupe comprised of 12 men and women who are professional actors, singers, dancers and aerialists.

I perform with the troupe under the stage name, Lilli Bubalotovich. I am also a choreographer and tour manager for the company.

I have been dancing since I was three. I started with ballet and added tap, jazz, and baton along the way. I began singing when I was in primary school and I began choreographing in my mid-20s.

After graduating from theatre school, one of my classmates asked if I would choreograph a dessert show for a big event she was planning. After that we became business partners and co-founded Les Coquettes in 2004.

We knew that burlesque was having resurgence in Toronto and wanted to bring our own brand of entertainment to the genre. Since I come from an acting, dance and musical theatre background, our shows focus on storytelling and are more cabaret in style.

Where do Les Coquettes perform?

Over the years, Les Coquettes has performed at many venues in Toronto including Lula Lounge, the Rivoli, the Poor Alex and the Drake to name a few. Our long-standing regular venue is an old converted Baptist Church in Little Italy now known as Revival Bar. We perform a few self-produced shows a year at Revival, which are very popular and usually sell out.

Since 2010, we have been touring around Ontario and recently added Alberta to our list of places we’ve performed. Some notable companies we’ve performed for include Harbourfront Centre, the Canadian Opera Company and Rethink Breast Cancer.

What are your favourite moments in Les Coquettes history?

I have many, but I would like to highlight two major achievements.

One of my favourite moments in Les Coquettes history was performing as part of the first Luminato Festival, in 2007, at the Harbourfront Centre.

We performed in a turn of the century Spiegel tent, which came over on a boat from Belgium. Les Coquettes were the house troupe every night of the Spiegel Show and were known as the Spiegelettes. The show was originally just part of the 10-day Luminato Festival, beginning in June, but was extended twice and ran until almost Labour Day. It was, by far, one of the best summers of my life.

Another favourite moment of mine was being the featured entertainment for the Canadian Opera Company’s annual fundraiser Operanation. I was excited and challenged at the thought of choreographing a number for the grand staircase in the lobby of the Four Seasons Centre.

With 26 steps and eight dancers to incorporate into one number, while artfully removing gloves, bustles and corsets, it was my crowning Busby Berkeley moment. It stopped my heart and it stopped traffic on University Avenue too!

Nominated by Beverly Lewis, supervisor of examinations for the Faculty of Arts & Science