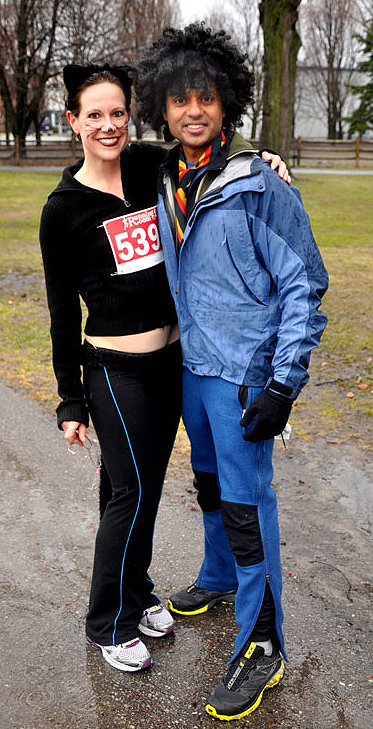 Mel has worked with the University of Toronto (U of T) since 2007.

“I’ve been at the University for about 17 years, starting with my BASc and PhD in Chemical Engineering. I did leave for two years to work in environmental consulting but returned to take on my current job in 2007.”

I am involved in environmental activism and education.

Recently I have joined with friends who started a new environmental organization called Run for the Earth. Our goal is to bring attention to what I believe is the root cause of a lot of the environmental issues we face today: overconsumption of materials and energy.

How did you first become interested in starting an environmental organization?

I’ve always cared deeply about environmental issues and have tried to do as much as possible to help.

When a friend approached me about starting an organization to raise awareness of overconsumption, I jumped at the chance.

What projects are you working on now?

I help organize fun events to get people to think about their own consumer habits and find ways to reduce their consumption. For example, in April I helped organize the Run for the Earth 5K run along Toronto’s waterfront, which was a zero-waste event.

At most running events, runners receive bags of advertising and overpackaged food that just end up in the landfill. Our event eliminates that and instead encourages runners to wear funny costumes made of recycled materials. More recently, we held our annual recycled costume parade on September 8.

What (or who) inspires or influences you?

I just feel that this work needs to be done. As someone with a strong background in environmental science, I feel that I have an obligation to educate others and step up to take on difficult issues.

There’s a lot of ‘greenwashing’ out there and I want to help people make informed decisions based on sound science.

Photo credit: Matthew Lerner. Mel Duhamel and Run for the Earth founder Dr. Tushar Mehta dressed up in costumes made from recycled materials for the annual 5K race / Submitted by Christina Heidorn, communications and outreach manager at BioZone, Faculty of Applied Science & Engineering