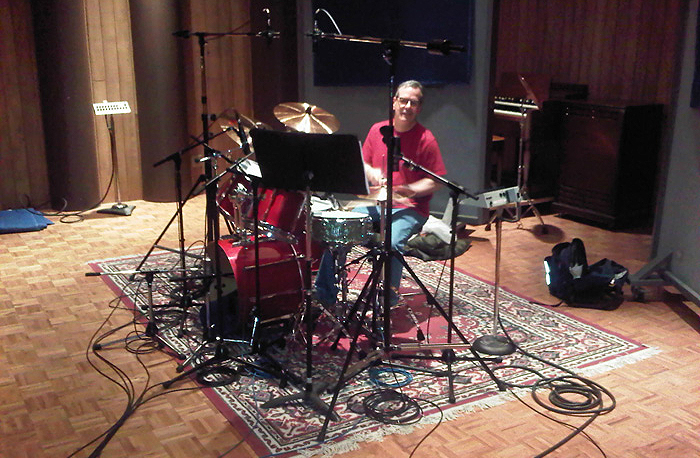 Paul has been with the University of Toronto (U of T) for 15 years, and a writer and editor for 33 years.

Until this past winter, I was a very amateur drummer. Back in high school, I played in a rock band but I gave it up at age 18 when I needed to get serious about building a career. That was the smart thing to do, but I left the band reluctantly. So, for 35 years, I just played in the basement, often to the chagrin of my family. Drums make a lot of noise — although our dog, Andie, seemed to like it!

This past winter, I signed up for a program called League of Rock. It’s for working adults who can play rock, but who have never had the time to even jam informally. The League puts you into a band, provides rehearsal space and equipment, professional coaching, a recording session and three live gigs at Toronto clubs over a 10-week period.

Man, I had the time of my life. It wasn’t like ‘rock band fantasy camp,’ but the fulfillment of a decades-long desire to do this thing I had so loved as a young guy. Not only was it fun, but I learned rock from the inside-out. And I discovered some stuff from that perspective that eluded me as a listener.

My big finding: rock looks easy. It seems to be almost a cavalier exercise in attitude, a few chords and basic beat and a lot of prancing. In fact, it’s serious business. Every rock song you’ve ever heard is as complex as a Beethoven symphony.

In our band, we would spend as much time talking as playing — discussing how to handle a drum fill during a break in “Love is the Drug” or how we’d all end on the same beat in Springsteen’s “Fire.” That took us weeks to nail.

When you see rockers on stage — from Springsteen and the E-Street Band to Serena Ryder and her band, it looks fun and spontaneous because it’s supposed to. In fact, they’ve spent countless hours rehearsing all that fun and more time as individual musicians mastering their instruments and voices.

For example, what Charlie Watts does on a Stones’ song like “Beast of Burden” is a wonder of math, timing and groove that he makes sound much easier than it actually is.

My big achievement: my drumming was messy and noisy when I started. By the time I finished, it was 100% better. The idea is to play less and make it work for the song, not for you to show off. It’s about giving the audience music they can groove to.

My parents were — and are — big music fans and they encouraged my sisters and I to enjoy music and play instruments. And my dad had a collection of old 78 rpm jazz records when I was a little kid. I played one once, wondering why he loved this music so much.

The first I played just stung me: “Traffic Jam” by the Artie Shaw Orchestra. A wild ride, that song, just a crazy stomp at an insane tempo. It’s like being on a wild roller coaster. And I was particularly taken with the drums, played by a very young Buddy Rich. That song opened up music for me and, especially, drumming. Once I heard it, I was hooked.

I got my parents to buy me a cheap drum kit and I started crashing away, trying to copy Ringo and Watts and Buddy and Gene Krupa.

What’s next for you with your music?

Good question! There’s no doubt that I’ve been stung again by rock and roll and being in a band. To me, this is the greatest fun you can have. And with all this progress I’ve made, I hate to not use it. So I would like to do the League of Rock program again when the time is right and find a way to do some regular jamming. I am not delusional — Springsteen’s not going to be calling me to fill in for Max Weinberg. But I have this voice inside me urging me to keep this up. And it’s not going to go away.

On the famous drummer side, it’s hard to boil it down to one. So let me highlight three drum gods.

For me, number one is Levon Helm, drummer and singer for the Band in the ’60s and ’70s and then with his own bands. I was fortunate to see him live at Massey Hall in 2011, a year before he died, and it was a deeply moving experience for me.

And Buddy Rich. Every drummer is wowed by Buddy. He pretty much invented the extreme possibilities of modern drumming. It’s also a good idea not to try what Buddy could do. Odds are you won’t be able to.

Finally, there is John ‘Bonzo’ Bonham, the dearly departed original drummer for Led Zeppelin. The master of the mystical practice of playing ‘in the pocket’ (hard to explain, but it’s about playing a little behind the beat of the band) and the guru, for me, of the “less is more” approach. Check him out on “Dazed and Confused” and give it a try. Man, I’ll be trying to nail his work on that one for the rest of my life.

On the more personal side, I’m blessed to have been guided by Topher Stott and Rob Vessman of League of Rock, two sensational drummers and very talented teachers. I also have three U of T friends who I owe a huge amount to: Jim Delaney, also a drummer, in the Provost’s Office, who encouraged me to try League of Rock; Michael Hussey of Vice-President, Research & Innovation (VPRI), a guitar wiz who got me performing again (on the blues harmonica, which I also play a bit); and, Jason Darby, a pro drummer and VPRI staffer.

When I was freaked out by trying to change my drumming from crazy, busy noise to something more stripped down, I sought out Jason’s counsel. He gave me the perfect rule of thumb: “Listen man, just keep it in the pocket and, if you think you’re playing too much, you probably are. And no sheet music on stage! This is rock and roll!”

Watch Paul Fraumeni in his League of Rock band Pint of Old Harper: