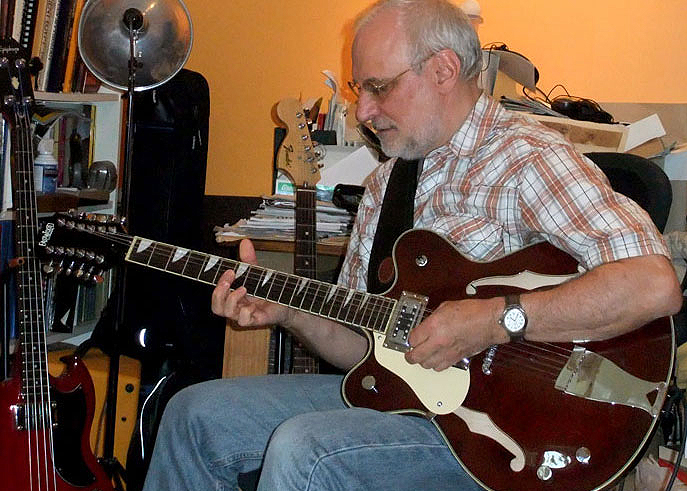 Ron has been with the University of Toronto for 29 years.

I’m a part-time ballet Sherpa for my 14-year old son who is in grade 9 at Canada’s National Ballet School. I’m eternally grateful to him for choosing ballet instead of hockey: the equipment is lighter, the coffee is better, we can travel to the school or the theatre by TTC, and the waiting area is infinitely warmer.

Being car-less, I cycle to work, which leaves a smaller footprint on the planet and is good for me. But by far my biggest passion is guitar playing.

How did you first become interested in playing guitar?

Like many people of my generation, I got interested in folk music in the early ’60s, then got bitten by the rock ‘n’ roll bug with the so-called British Invasion. The Rolling Stones, bless ‘em, then turned me on to blues, and I’ve never looked back.

I took up the guitar at 15 and pretty much taught myself by staring at other players’ fingers then trying to reproduce what I could remember. During my teens and early 20s I played bass in a rock band as well as guitar and harmonica in an acoustic folk duo (I leave the singing to other people and the world is much better off for it).

I’ve always played ‘lefty,’ which simply meant switching the strings around a regular guitar (and pretty much destroyed an acoustic 12-string guitar during my Leadbelly period). It’s a real treat to finally be able to afford real lefties today and not have all the buttons and switches in the wrong place.

Do you still perform live? If so, where?

When our son was four, we decided to go back to church so that he could at least know what that part of our culture was all about. So we joined Eastminster United Church in Riverdale and found it welcoming and wonderfully inclusive. Before we knew it, my wife was singing in the choir and I was playing guitar every Sunday.

As an untrained guitarist who had been playing 12-bar blues arrangements pretty much exclusively all these years, suddenly having to play what are essentially piano pieces has been very good for me as a musician. I’ve had to adapt to playing songs in various keys, not all of which are guitar friendly, and with many more chords than one is used to seeing in blues and rock.

Having to perform regularly has also done wonders for my practicing. We’re always too busy or too tired for various non-work activities, but there’s nothing like weekly deadlines to get over that.

Who inspires or influences you?

Whenever I pick up the guitar I usually start playing a Robert Johnson or a Muddy Waters Delt.