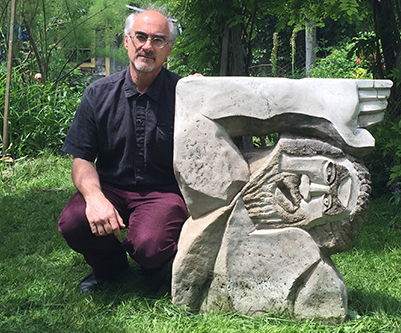 Professor Ronald Beiner has taught political philosophy at the University of Toronto for 31 years. He is currently a professor of political science at U of T Mississauga.

Ronald balances the demands of an academic career with his love of sculpting.

How and when did you first become interested in sculpting?

I’ve been sculpting since I was a teenager. My mother used to take and teach art classes, and she would often bring home art ideas for me and my sister to try. She gave me a little block of soapstone, which I proceeded to sculpt, and I found it so satisfying that I went on doing it off and on for the rest of my life. When I was a child, I loved little rocks (red granite, for instance) and I very much think that laid the groundwork for my sculpting.

Does your subject emerge as part of the process or do you start with an idea of who or what you want to sculpt?

In general, I don’t have ideas in advance. I start from a stone that appeals to me and look at the stone for weeks and sometimes months before I start sculpting it. All my ideas come from the stone. I guess the process begins when I pick out a stone that I think has interesting potential.

I work in three media: soapstone, alabaster, and limestone. All three tend to be soft (limestone sometimes less so) and are easy to sculpt. The choice of stone is everything, and what I sculpt from it simply follows from what is suggested by the material.

Has your work been influenced by other artists? Other scholar-artists?

There are certainly sculptors who I admire or with whom I think I may have affinities. If I had to pick a single favourite, it would probably be Birds Erect by Henri Gaudier-Brzeska. His portrait of Ezra Pound is also great. Other favourites include Jacob Epstein’s stone sculptures, notably his tomb for Oscar Wilde and his big alabaster rendering of Jacob and the Angel. There’s a truly great sculpture by Raymond Duchamp-Villon on the cover of my new book (Political Philosophy: What It Is and Why It Matters), though it’s terracotta rather than stone.

Even more impressive than anything modern, from my point of view, are the epic granite masterpieces of ancient Egypt as well as Mayan and Aztec sculpture. But overall, I’m not very well-educated in the history of sculpture or even contemporary sculpture. My son Zimra possesses a far better sculpture education than I do.

Doing something emphatically manual is good therapy as a counterbalance to doing work that is so focused on the head or brain. I don’t use power tools, so it’s extremely manual — and that’s a large part of the attraction. It wouldn’t be nearly as therapeutic if it were less manual. Sculpture and academic work are different insofar as one is purely a labour of the mind and the other is almost purely a labour of the body.

But in other respects, the two activities are surprisingly similar (for me at least). Both are creative activities. Both conjure up or relate to a public world that draws one out of oneself. Both rely on what the political theorist Michael Oakeshott called ‘pursuit of intimations.’ One gets an intuition about something that one thinks would be interesting, intellectually or aesthetically edifying and fun to explore or develop. In that sense, I’m doing the same kind of thing (or think I am) in both domains — but in one case with my mind, and in the other case with my hands.

Can we see your work in Toronto?

Two largish pieces (Freud and Moses) are on long-term loan to the Department of Political Science at St. George, so they can be viewed in the departmental lounge. Two pieces by my son Zimra can be seen there as well. David Cameron, our dean at St. George, owns one of my pieces. Images of my work can be seen on my website, where my books and my sculptures are given purely equal standing. And check out the link to Zimra’s website: his work is far more ambitious than mine.

One last reflection: the world we currently live in seems swept up in all kinds of cultural insanity. Our culture hugely privileges speed and over-stimulation over slow thoughtfulness and quiet reflection. An old friend of mine (Leah Bradshaw of Brock University) said she tells her students to pry themselves away from the Internet and instead make things! That strikes me as a really excellent prescription for coping with the cultural lunacy of our times.